A Summary of the week-long ensemble can be seen here: Le Vent du Nord in Forest City, IA

LeVent du Nord will perform a concert for the Community on April 28th, 7:00 P.M. at Immanuel Lutheran Church, 245 South Clark Street, Forest City.  Tickets are available at the Chamber of Commerce (145 S. Clark Street) for $10.00 for adults and youth will have free admittance with a Forest City School ID.  Advance ticket purchase is encouraged.

Le Vent du Nord comes to Forest City through the generous contribution from 3M, Arts Midwest and many more.  This is the second of four ensembles that will each spend a week in Forest City.  Each ensemble will spend time with Forest City Elementary – High School students in workshops and performances.  They will also host master classes at Waldorf University,  perform for Forest City elderly at Forest Plaza, and for the community at the YMCA. 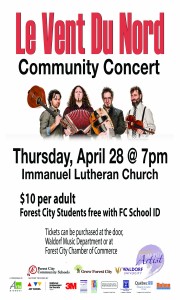 Considered a driving force in progressive folk, Le Vent du Nord captures the energy and mirth of a Saturday night kitchen party, infusing old Québec with a breath of fresh, cosmopolitan air. Since its founding in 2002, Le Vent du Nord has won critical acclaim and audience adoration across Europe and North America. The quartet has performed well over 1,000 concerts, racking up prestigious awards including two Junos (Canada’s Grammys), a Canadian Folk Music Award, and “Artist of the Year” at the North American Folk Alliance Annual Gala. The band delivers catchy songs and tunes, some taken from the Québec traditional folk repertoire while others are original compositions. Its concert will feature songs from the ensemble’s latest CD, Têtu. The group has a rich and varied instrumentation, well-polished musical arrangements, and wonderful vocals. The ensemble includes four outstanding musicians: Nicolas Boulerice mesmerizes on the hurdy-gurdy and piano, Simon Beaudry brings sweet vocals and a rich guitar & bouzouki, Olivier Demers serves up energetic violin, guitar, and rhythm, and Réjean Brunet brings the colorful sounds of the accordion to this wonderful mix.

“It’s not often smaller communities like ours have the chance to host international ensembles like Le Vent du Nord—let alone for a full week,” says Norma Hertzer, Grow Forest City, Marketing Director.  “The music and culture Le Vent du Nord shares will be absolutely fascinating and different from what we typically hear. Le Vent du Nord will visit many schools and community locations during the week and present a full public concert as well.  We expect this residency will be a delightful experience for everyone.” The group will arrive in Forest City on April 23 and will conduct seminars, workshops, and small performances at Waldorf University, Forest City Schools and through out the community. The community concert will be Thursday, April 28th, 7 p.m. at Immanuel Lutheran Church in Forest City.

Arts Midwest, one of six U.S. Regional Arts Organizations, partners with program sponsors like The National Endowment for the Arts and 3M to cover a substantial portion of the program cost so communities throughout the Midwest can enjoy this rich arts experience. Forest City was selected as one of only nine Midwestern cities to host the 2015–2017 Arts Midwest World Fest and is the only partner community chosen in Iowa. “It’s a real honor to be part of this program,” says Norma Hertzer. “We really enjoyed working with the artists who have already visited as part of Arts Midwest World Fest and know Le Vent du Nord will be a lot of fun.”

David Fraher, president & CEO of Arts Midwest notes, “Arts Midwest’s goal is to make meaningful and lasting impressions on the communities that host this program. We think week-long residencies can offer so much more than one-day visits. There are more opportunities to truly connect with each other whether through workshops in schools, concerts in the greater community, or through social gatherings. We want this to be a rich experience for the entire community.”

A program of Arts Midwest, the 2015–2017 Arts Midwest World Fest cycle is generously supported by the National Endowment for the Arts, 3M Foundation, and Anime Twin Cities. Additional support is provided by the Ministry of Culture of the People’s Republic of China for Anda Union, the Consulate General of Israel to the Midwest for Baladino, and the Délégation du Québec à Chicago for Le Vent du Nord. This activity is made possible by the voters of Minnesota through a grant from the Minnesota State Arts Board, thanks to a legislative appropriation from the arts and cultural heritage fund.