(641) 585-2092
Send us a message
Navigation Menu
You are here:
Home Lorraine Klaasen performs in Forest City 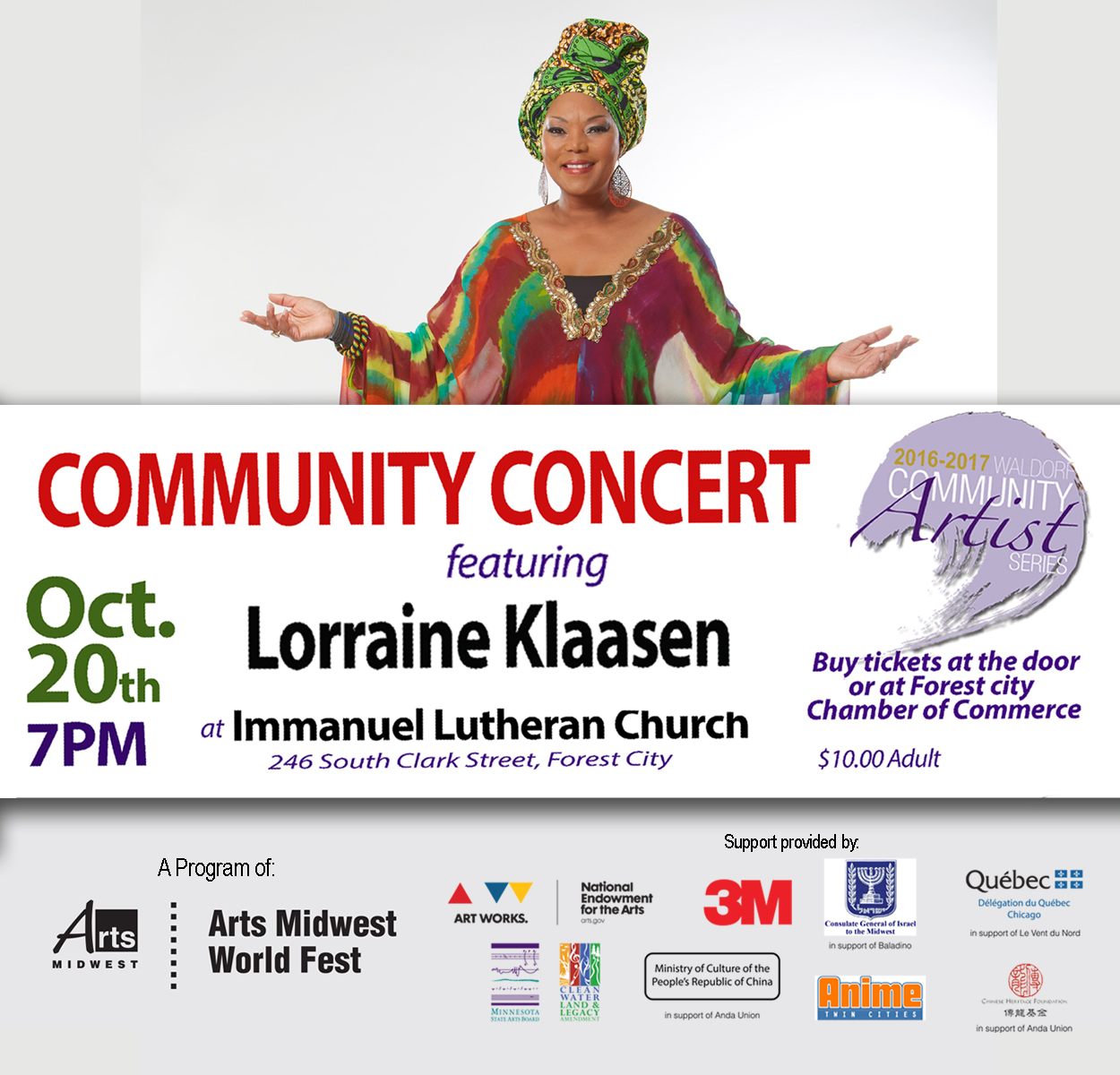 Forest City, Iowa — Lorraine Klaasen and her four member ensemble will tour this fall as part of Arts Midwest World Fest. The five week tour begins in mid-October and will take the group to Forest City, IA; Brookings, SD; Wahpeton, ND; Thief River Falls, MN; and Rhinelander, WI. Lorraine’s ensemble will spend a week in each community sharing the music of South Africa through workshops in schools and community locations, and a public concert near the end of each week.

“These ensembles are brought to us through the generous donations from sponsors such as the National Endowment for the Arts, Arts Midwest and 3M Foundation. We are thrilled that Lorraine Klassen will be performing in Forest City,” said Norma Hertzer, Grow Forest City. “We have not previously featured a South African artist in the performing ensembles, and I’m so glad we have the opportunity to do so now.” Lorraine Klaasen is one of the few South African artists who have preserved the classic sound of Township Music, which continues to be the most distinctive sound to come out of South Africa.

Born and raised in Soweto, Lorraine has electrified audiences worldwide with her dynamic stage presence and showmanship. A 2013 JUNO winner for World Music Album of the Year, Lorraine is the daughter of legendary South African jazz singer Thandie Klaasen, and was influenced by South Africa’s music giants of the 1950s and 1960s such as Miriam Makeba, Dolly Rathebe, Dorothy Masuka, Sophie Mgcina, and Busi Mhlongo.

Her newest album, Nouvelle Journee, features new musical styles with songs in the Tsonga, Sotho, isiZulu, and Xhosa languages of South Africa, as well as in English and French. The songs are thought-provoking and touch on the importance of family, empathy, love, and hope.

Arts Midwest World Fest, a program of Minneapolis-based Arts Midwest, gives small and mid-size communities an opportunity to experience people, culture, and music they may be unlikely to enjoy otherwise. Since 2003, the program has partnered with over 60 Midwestern communities and featured ensembles from all over the world.

A program of Arts Midwest, the 2015–2017 Arts Midwest World Fest cycle is generously supported by the National Endowment for the Arts, 3M Foundation, and Anime Twin Cities. This activity is made possible by the voters of Minnesota through a grant from the Minnesota State Arts Board, thanks to a legislative appropriation from the arts and cultural heritage fund.